MACON, MO -- The Harlem Wizards made their third appearance at Macon R-1 on Sunday, January 12th, 2019. The event was put on by the Macon PTO. “We had 403 tickets sold and about 30 given out for free. PTO raised nearly $6,000 on the entire event including raffle tickets. It couldn’t have been successful without all of the help and support from the community. Special thanks to Melissa Hallowell, Rhonda Olson, Brenda Nelson, Stacy Quinn, Tanar Piland, Susan Hazen, and Macon Elementary Staff for all of the behind the scenes planning they assisted PTO parents with. They are real rock stars,” stated PTO President Deb Ziebarth.

The Harlem Wizards are a professional basketball team who look to entertain the crowd through tricks and a series of alley oops; with the final score being irrelevant. They began in New York in 1962 and since then, have traveled the country helping raise funds for public schools and nonprofits. “Last season alone playing in over 450 communities across the USA, while raising more than $3 million for schools and nonprofits.” - Harlem Wizards Website

“With the Chiefs Game and the weather, we were really pleased with the turnout. The Wizards are based out of Chicago but the players are from all over the US. We were their 2nd of four games in Missouri in the last week,” stated Ziebarth. Local Lift Cheerleaders also performed at the game.

C.A. Shoush Company of Macon, made and donated the t-shirts that the Macon players wore for the game.

Headline picture: Macon Elementary Student Taegan Nelson with one of the Harlem Wizards. 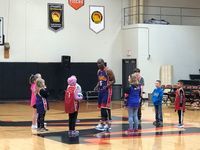 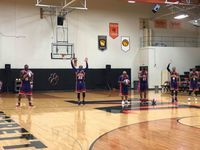 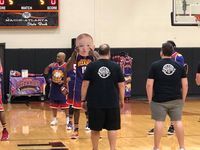 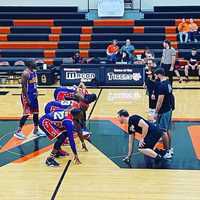 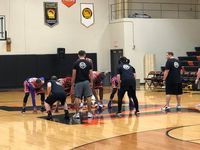 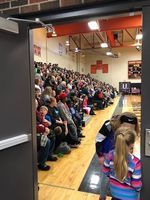 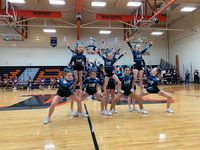 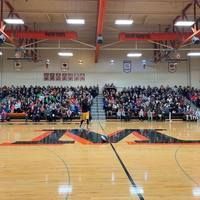 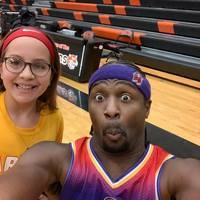