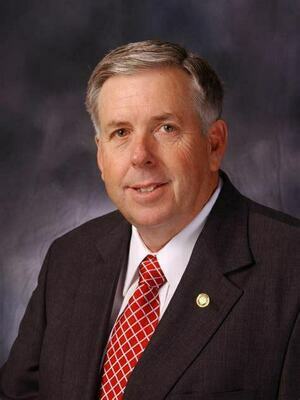 “We are thankful to all our partners who saw the importance of this bridge and came to the table to find solutions,” Governor Parson said. “This new bridge will help keep millions of vehicles moving efficiently and support greater state and local economic growth.”

The current bridge was built in 1960 and is rated as being in poor condition, which may have resulted in weight restrictions in the coming years. The 60-year-old bridge is safe and will continue to be maintained by MoDOT while construction of the new bridge is underway. The bridge carries 12.5 million vehicles per year, including 3.6 million trucks.

The new Missouri River bridge will cost approximately $240 million and will provide a safe and reliable bridge for interstate travelers for the next 100 years. This project was funded in part by an $81.2 million Infrastructure For Rebuilding America Grant, the largest competitive grant ever received by MoDOT.

“Of course, this bridge is not the only Missouri bridge in need of repair. There are hundreds of bridges across the state that need rebuilt or replaced, but this project shows we are making real progress by working together,” Governor Parson said. “We are extremely proud of the work accomplished by our MoDOT team and look forward to seeing what else they achieve in the coming years."

“This bridge was designed with the future of Interstate 70 and the safety of the traveling public in-mind,” said MoDOT Director Patrick McKenna. “When complete, it will include two bridges, one in each direction of travel, each wide enough for four lanes of traffic. This approach also allows us to construct both bridges with limited impacts to traffic.”

The new bridges will include many safety enhancements, including a high friction surface treatment and pavement sensors to reduce weather-related incidents, wet reflective striping, and a linear delineation system (a line of reflective signs along the barrier wall) to help increase lane and bridge visibility.