Macon County Courthouse and Jail refinancing set to have a net interest savings of $1,075,842 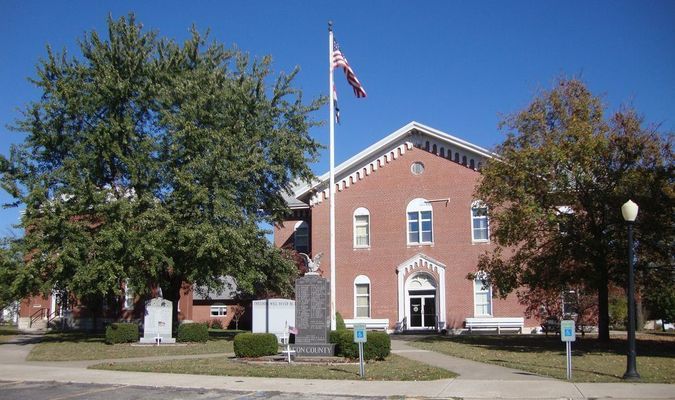 MACON, MO -- At a regular meeting of the Macon County Commission conducted at 11:00 A.M. on Thursday, July 9, 2020, at the County Courthouse, a resolution authorizing the issuance and sale of $6,790,000 of lease refunding certificates of participation was unanimously approved. According to the figures presented by the County’s Municipal Bond Underwriter, L.J. Hart & Company of St. Louis, Missouri, the net interest savings to the taxpayers of Macon County, Missouri with this plan computes to $1,075,842 which represents an improvement of about $400,371 above the very conservative projections reviewed at the May 28, 2020 meeting. These interest rates now available to Macon County are the lowest in more than sixty years of the municipal bond market. The plan which involved accelerating principal payments to absorb interest savings from 2021 through 2032 with the bulk of the savings occurring in 2033 and 2034, the final years of the original $9,000,000 Lease Certificates of Participation, Series 2015 that funded the construction of a new jail and renovations, additions, and improvements to the courthouse buildings. This plan also reduces payments by one full year with the final principal payment now occurring in 2033. It was one of four options that L.J. Hart & Company shared with the County officials and became the favored proposal due to the excellent amount of interest savings without having to deplete the County’s reserves, especially with the uncertainty of the COVID-19 pandemic. “We generally came to a consensus that this plan represented our most economical action and are very pleased that the municipal bond market brought us these highly favorable interest rates to benefit the Macon County taxpayers, “Mr. Wyatt remarked.

Hart & Company was directed to make the refunding certificates available to local financial institutions. The District I Commissioner, Kevin Souther, was pleased that efforts were made to give local banks this opportunity. The support from the New Cambria Bank by purchasing $710,000, the Macon-Atlanta State Bank obtaining $750,000, the Central Trust Bank for acquiring $400,000, and the Bank of Kirksville buying $930,000 of the certificates is an added benefit. Knowing that the County still gets this level of support on a financing with an effective interest rate of 1.09%, when there are likely more profitable investments and loans to consider, speaks highly of the banks’ support for the County.

District II Commissioner, Clarence Walker, pointed out that these refunding certificates are also callable at no penalty in five years. This preserves the ability for the County to prepay with our future revenue surplus can further improve this initial $1,075,842 of savings while also allowing for other options for long range facilities planning by the County Commission.

Larry J. Hart, CEO of L.J. Hart & Company, explained that the settlement (closing) date is July 29, 2020, which is within 90 days of the October 1, 2020 call date of the Series 2015 Certificates enabling this financing to be considered a current tax-exempt refunding. “The refunding certificate proceeds, after deducting the costs of issuance, are to be kept at trustee bank, UMB, N.A., Kansas City, Missouri, to be applied on October 1, 2020 to prepay all of the remaining $7,000,000 of the Series 2015 Certificates,” Mr. Hart remarked. He also complimented the three County Commissioners, the County Treasurer, Krista Bruno, and County Clerk, Shirley Sims, for their attention to detail and strong performance on the rating call with S&P Global. “The cooperation and team work were impressive and helped achieve the strong investment grade Issuer Credit rating of “A+” with the lease certificates carrying an “A” rating,” Mr. Hart said. The Commission along with the County Clerk and Treasurer thanked Mr. Hart and his staff for their time and expertise in facilitating the timing of the refinancing to provide the most benefit to the tax payers of Macon County.

Before the adjournment of the meeting Mr. Hart took a few minutes to review the history of the Series 2015 projects of the new jail and the extensive remodeling of the Macon County Courthouse. He mentioned the hard work that the Commissioners and Citizens Committee devoted to conducting public forums throughout the county at which the informational video was followed by question and answer sessions. At the election on April 8, 2014 the ½ cent capital improvement sales tax received a 79.78% approval margin and the ¼ cent law enforcement sales tax passed with 70.90% majority. There were numerous meetings to get the projects started to be certain that the financing was sized adequately to provide the funds needed for the projects which was close to $9,000,000. The five year optional redemption (call) provision implemented at the time is the key reason the county can now save this larger amount of interest expense. In summary, Mr. Hart stated that in his many years of municipal bond financing experience these projects and accompanying financings are excellent examples of how local elected officials and their support groups can be good stewards of the public’s financial interest.