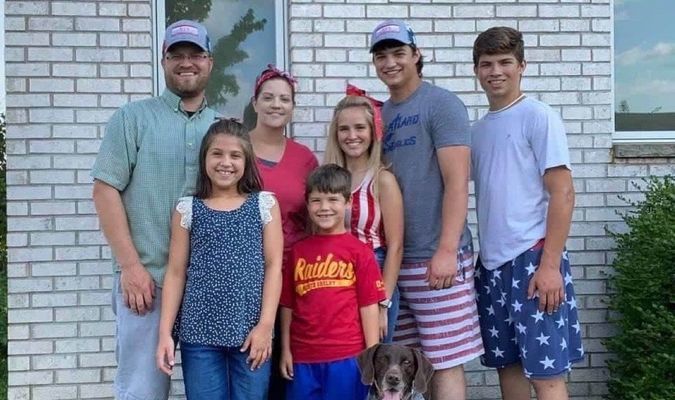 ANSWER: I grew up on a small farm in Mound City, Kansas with my mother, older sister, and grandparents. Then around 1993, we moved to Texas so my mother could go to Bible College. I graduated from high school in 2001 from American Heritage Academy. I was a strong athlete and we won state championships in football and baseball. My senior year I was voted to go to the ALL Star Game with 100 other players from across Texas.

My role model growing up would be Johann who has been a father figure for me during my adolescence to now. He was a detective in the child abuse unit in South Africa before moving to Texas and was vital during difficult times in my life. He taught me the value of active listening, compassion, courtesy, and respect for others.

After high school I moved back to Kansas and started a family. Shortly after, we decided to move to Shelby County to help hurting and troubled teens at Heartland Ministries. I have always had a heart for helping others in their time of need. I would say this comes from a time in my life where I needed a helping hand due to being a victim of assault. The help I received from law enforcement gave me a great appreciation for their work and I wanted to be a cop. In 2009, I attended the Missouri Sheriffs’ Association Training Academy, 700 hour class, in Mexico, MO. After graduating from the academy, I started working with the Shelby County Sheriff's Office and have been there ever since.

ANSWER: I want to continue serving the people of Shelby County in a greater capacity than I already do as the current Chief Deputy; being the Sheriff would allow me to do this. As Sheriff I would be able to continue to build upon relationships that I have built thus far in Shelby county and surrounding agencies.

ANSWER: I have written and received several grants for improvements in the department, including subsidizing deputy salaries. If elected I hope to continue such improvements.

ANSWER: I have served in the Shelby County Sheriff’s Department for the last decade. I really appreciate the support and confidence shown by Sheriff Perrigo in making me Chief Deputy. I currently oversee the daily operations of the Sheriff’s Office and the Jail, therefore with that experience; I would be able to transition into the responsibilities of Sheriff more smoothly.

ANSWER: I think the most important thing about being sheriff is for the community to experience our department’s stance on being fair, honest, and transparent. I’ve dealt with a lot of good people on their worst days. I want victims to feel secure in knowing that we take their situation seriously and that the community can depend on us knowing they will be taken care of with respect and honor.

ANSWER: We are behind the times with some of our equipment that would assist us with officer and community safety. Don’t get me wrong; we have the knowledge and skills to solve and investigate crimes, but it would be easier and more beneficial with updated equipment. I plan to utilize funds available through grants and equipment that other departments no longer use. This will be a process and challenge, but I am ready to meet that head on.

ANSWER: The budget/money issues present challenges for our small county. Another difficult aspect is dealing with mental health and the lack of funding in our county for people to get the proper treatments and or counseling. The constant and ever-changing drug issues create a major problem in our county as well.

ANSWER: One of my roles within the department is training. I am certified in several areas to provide continuing education for Shelby County and other surrounding agencies. This has given me a good working relationship with many other professionals. I plan to continue and grow those relationships and use other agency resources to help solve or prevent crime. Also, the Shelby County Sheriff’s Department will be available to help other agencies with anything we can.

ANSWER: If elected, I expect each person working with me to treat everyone in the community fairly and with respect regardless of situation or reputation. I plan to lead with transparency, accountability, trust, compassion, and common sense. I will expect everyone in the department to have that same attitude.

ANSWER: One of my goals is to draw information from local leaders in the community, schools, and organizations to target troubled areas in our county so that we can overcome and prevent developing problems. I also want to ensure that our department is seen as a resource for those in the community. I think we bring unity by living and working together with other people who have similar goals for our county. If elected, I will continue to serve in other areas that I currently volunteer in within the county.

ANSWER: In my ten years of experience with Shelby County law enforcement, I have earned a reputation for never backing down, even from cases that are tough or controversial. I have treated people fairly and done my best to serve. I believe that reputation will give people confidence in my leadership for the future. One area I plan to show accountability is by outfitting our department with body and in-car cameras to ensure transparency. This will not only help with officer safety but also with community trust.

ANSWER: I have the knowledge of how to successfully be Sheriff by learning from the current Sheriff, Dennis Perrigo. He promoted me to Chief Deputy due to what I have learned and what he sees in me as a leader.

ANSWER: I have been teaching courses for several years now and I am the only candidate that has multiple courses approved through the Missouri Sheriffs’ Association. I have numerous instructor certificates that show I know how to lead. This allows me to conduct courses for our department and any surrounding departments. Officers can receive credits in these courses to keep their POST license. I currently manage the daily operations of the department and the jail. These operations consist of any and all issues with the inmates, transportation of inmates to and from court, jail, DOC, booking process of the inmates, and making sure the inmates have their basic medical needs meet. I also oversee the CCW process, grant writing, daily schedules, etc.

ANSWER: I currently serve as the Chief Deputy for Shelby County. If someone else is elected, I will certainly give them my utmost support. My role in the department would be a matter of discussion at that point. I would love to stay on as the Chief Deputy but am committed to Shelby County in any capacity. I have no plans to quit my role as a deputy simply because I was not elected. My family and I are residents of Shelby County and it is an awesome place to raise my kids.

ANSWER: My wife, Amber, and I are grateful to be long-time residents of the county and to be raising our four children here. If elected as Sheriff, I want to make sure every family has equal advantages and that every family member is treated with decency and respect. I would love to serve as your Sheriff and greatly appreciate the support I have received so far.

Headline picture of Arron Fredrickson (back left) alongside his family.