Local Musicians take to Facebook to bring happiness during pandemic 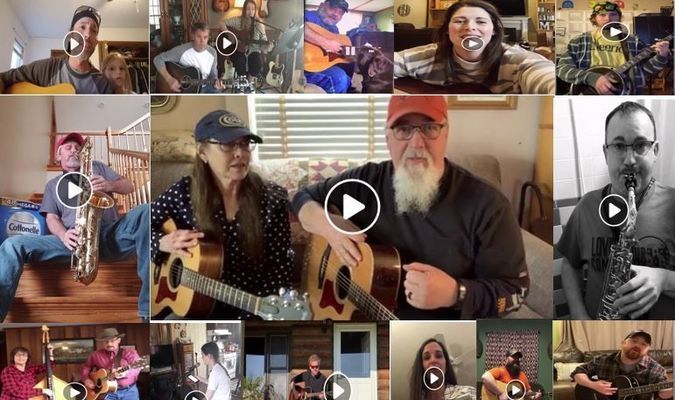 MACON, MO -- On March 20th, the dynamic duo Jace Weber along with his wife Sally (with guitars in hand), sat down in front of the camera tuning into Facebook with a pitch to encourage local musicians to share their talents on social media. Just a few short days later, dubbed the "Quarantine Concerts" well over a dozen people have joined Jace and Sally in sharing their musical talents for everyone to view while most of us are staying home during the COVID-19 Global Pandemic. "The idea just came from flipping through Facebook after the COVID-19 thing got to rolling. It was a whole lot of scary stuff, and not much else. It looked like, to my wife Sally and I, that folks just needed some happiness. Music makes everyone happy," stated Weber when asked what made him come up with the idea of online concerts.

People like Macon R-1 Band Instructor, Jamie Baker playing a saxophone, Mary Beth Truitt playing the bass along with Ronnie Truitt and his guitar, Martina Miller singing while accompanied with her guitar, Lauren and Mike Arnold singing and playing a rendition of "Dreams" a best hit of Fleetwood Mac, all of which (along with others), have taken to Facebook to provide viewers with something to smile about. "I've always said, this corner of Missouri is loaded with talent. Being a musician myself, I'm probably a little more aware of that. I've had several people post and tell me in private messages, that they had no idea there was so much musical talent in our area," recalled Weber when asked about his reaction when looking back and seeing the individuals who have joined in on the musical fun. Jace Weber along with Mary Beth Truitt, Ronnie Truitt and Daniel Thompson, are part of the local band Keota.

The "Quarantine Concerts" have brought-in thousands of viewers and whoever gets the most "likes" on their video, will win two rolls of toilet paper. "I just want to thank all of my musician friends for participating. We started it with a video that Sally and I made, telling folks that whoever got the most likes on their video, would be the winner of 2 rolls of toilet paper. It was funny of course, but no one's really concerned about winning some TP, I believe that most are of the same mindset that Sally and I are. Bring some smiles, a little diversion," stated Mr. Weber.

In the end, when asked about what he hopes viewers walk away with, Weber replied by saying, "a smile, a laugh... a little joy for their hearts in a situation that's unnerving and a little frightening for some, an irritation for others. Music can fix a lot of busted things."

To view the videos, visit Jace Weber's Facebook page by clicking on the following link: https://www.facebook.com/jace.weber