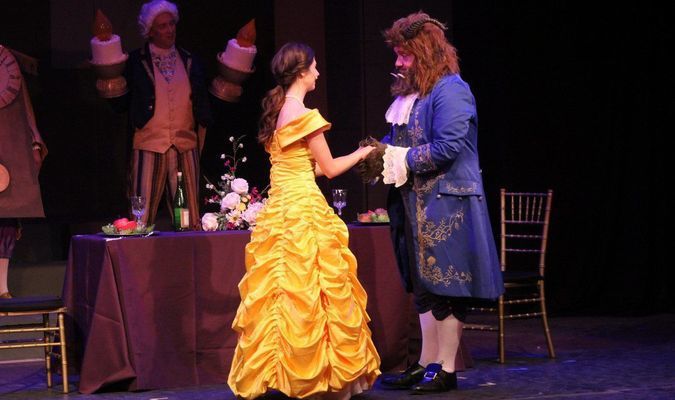 MACON, MO – For the last few months (since January), community members from Macon, Shelbina, Brookfield, Kirksville and everywhere in between have been practicing their scripts and attending play practice, all of which have been coupled between their normal responsibilities, jobs, careers, school work, etc. Macon’s very own Community Theatre better known as Carousel Productions (celebrating over 40 years) is set to bring alive a “tale as old as time” the magnificent Disney story of “Beauty and the Beast.” Macon's Carousel Productions held its first show in 1978. The original Disney Production of “Beauty and the Beast” debuted in 1991 but has roots from a French romance story that traces back to the 18th Century. Back when it was originally released, the film grossed approximately 332 million dollars at the box office worldwide. It is a story that has found itself on stages from Macon R-1 High School to Broadway, and a recent remake that featured Actress Emma Watson, as Belle.

For the Macon Carousel Production, Director Dan Coons, expressed how much he has learned helping and working with the other directors in creating the vision of where the play needs to go at Maples Repertory Theatre. “Directors have the vision for how the show needs to come together. There are several directors and each individual has a slightly different vision than the other. I quickly learned to compromise and truthfully, the diversity of ideas has only made this production better,” stated Coons. Carousel Productions being a “Community Theatre” encompasses several local communities around Macon with people who come from many backgrounds. Director Coons said, “It is a team effort at the end of the day. We have someone like Bryce Duncan who is brand new to the scene of acting and someone like Steve Wilhoit who has been in previous productions on this stage. Every person brings a new perspective and we all benefit from it.” When asked what his favorite scene was, Coons stated that he has seen the production on Broadway (Fabulous Fox) to the high school version at Macon High School. “I love the entire story and that is one of the main reasons why I wanted to get myself involved in this production. The idea of beauty within and the ability for the story to carry that throughout the entire show is something I have always enjoyed,” stated Coons. Mr. Coons graduated from Mizzou with a Bachelor’s Degree in Agriculture Education where he then taught for several years and soon after, was hired by Macon Atlanta State Bank where he worked for 34 years, retiring in 2016.

The leading role in the story, Belle, is played by Macon’s very own, McKenna Nelson. Belle the character would be described as kind and loving. Disney says, “Belle longs for so much more than a "normal life" in this small, provincial town - a town where girls don't aspire to more than marrying well… Amongst the townsfolk, Belle is labeled an outcast because of her free-spirit. Her favorite genres being fantasy and adventure. Belle's passion for fantastical stories, coupled with her outcast status, has left her yearning for a life of adventure outside of her small village. She unexpectedly gets her wish when she becomes prisoner to a Beast in order to save her father's life.” Ms. Nelson has been involved with the theatre in the past, but Beauty and the Beast marks her first play in which she has to put her” big girl pants on” recalled Nelson. “I spend roughly 4-5 hours each week preparing for the show. I record myself saying lines as I am an auditory learner. This is my first play as an adult coming back to my hometown. Compared to other plays I have helped with, this one I have had to put my big girl pants on,” stated Nelson. Throughout the story, there are several scenes in which The Beast can be rude and at times, scary by yelling, shouting, and growling toward Belle. When asked how she handles those parts, Nelson stated, “It is the inner dialogue of Belle. Not McKenna, but inner Belle. When I can put myself in that perspective and in character, I can be terrified in those scenes like I should be.” Elaborating on “being in character” Ms. Nelson stated that she loves acting for that simple reason: “I can act in a way that I wouldn't outside of this theatre as a person. I can yell and shout at times. I can temporarily escape from my normal self.” When asked what her favorite scene is, she did not hesitate and rendered the answer, “Slapping Gaston” who is played by Steve Wilhoit. Belle is one of the eight original Disney Princesses, joined by Snow White, Cinderella, Aurora, Ariel, Jasmine, Pocahontas, and Mulan. For many of us, we can recall the time in which we held a strong predilection for Disney characters such as the Disney Princesses when we were a child. For those that have traveled to Disney Land/World, visiting with and capturing a shot with one of the princesses is something that is most likely framed and featured in our house somewhere. With many little eyes expected to be watching McKenna Nelson as Belle, we asked her what the biggest piece of advice she has for children and she responded with, “To always be kind and have hope for the future.” McKenna recently graduated from Central Methodist University with a Bachelors of Arts in Music. She currently teaches K-12 Band and Choir at Atlanta C-3 in Atlanta, Missouri.

A returning face to the stage at Macon Repertory Theatre is Joel Vincent. Mr. Vincent has famously played the role of Jean Valijean in the production of Les Miserables. In Beauty and the Beast, Vincent returns in another leading role, this time, as the Beast. The Beast would be described as someone with a quick temper and prone to anger. Disney says, “The Beast is the male protagonist…A prince by birth, he was cursed by a mysterious enchantress into as punishment for his selfish and cruel nature; only by loving another and earning their love in return can the Beast free himself and those affected by the spell before time runs out.” When asked what his favorite part of the play is, Joel Vincent stated, “This is a great story of symbolism. The Beast obviously not the most attractive character in the show, coveted beauty. Whereas Gaston, who was pretty on the outside, was ugly in the inside. Through his experiences, the Beast figures out that true beauty is in your heart and soul.” Leading up to the final dress, Vincent recalls practicing his scrips at least three hours a day for the first three weeks, and most recently, an hour every day. He has watched previous productions of this story and with that, has taken bits and pieces of what he liked from other people who played his role to aid in molding the character he wanted to be. “There is way more to preparing for a play than just practicing and memorizing your scripts. You have to work on getting into character, the mannerisms of your character, and blocking. At the end of the day, it is a team environment. We are helping each other become better at our roles. A sense of community. We are all working toward the same goal,” said Vincent. In the end, when given the chance to share advice with younger kids and younger actors, Mr. Vincent stated, “One mistake doesn’t define who you are. Don’t let it determine the rest of your life. You can make a happy ending. Tomorrow is a new day. A new you.” Mr. Vincent is a Salesman at US Cellular and is from Macon.

Returning to the Maples Repetory Theater is Steve Wilhoit who in the past famously played Danny Zuko in Grease, among other appearances. In Beauty and the Beast, Wilhoit plays Gaston who is the main antagonist in the play. Gaston the character can be described as arrogant, greedy, and self-conceited who is trying to marry Belle. “For once I am the bad guy and I don’t mind it,” stated Wilhoit when asked what makes this production different from the others he has been featured in. Wilhoit also stated, “I am getting older which has made things more of a challenge at times. This is also the first time that we are using pre-recorded music instead of an orchestra pit.” Just like the previous two characters we interviewed, Wilhoit has put in numerous hours getting prepared every week. Having a career outside of the theatre and acting as the production’s villain, we asked Mr. Wilhoit how he becomes Gaston, “When I go up those stairs I have to stop everything that I have been doing. To clear my mind, aside from my part, and get into his personality.” His advice to younger theatre enthusiasts who want to act is, “You will have nerves that will keep you from wanting to try new things. Give it a chance. Being in a production is such a fun and fulfilling experience. You get the chance to take on so many different roles. In some aspects, you get to escape from the world outside.”

Our final interview was with one of the youngest actors on stage, Bryce Duncan who plays Chip and LeFou. Disney describes the character Chip as someone who is "Curious, adventurous, loving, excitable, playful, innocent and charming." Additionally, Disney says of LeFou as “Gaston’s snide and accident-prone sidekick.” Shortly before the final dress, the role of LeFou had to find a new actor. Bryce Duncan stepped right into the role. Bryce originally was playing the character “Chip.” Trying to memorize the script of LeFou with a shorter time than usual, Bryce recalls working several hours a week on his script. “I have been in the Children’s Production here at the theatre, but this was my first community play. My first play in which had adults acting alongside me. I have to act out how the character would feel. I had to prepare myself for how Chip would act and then LeFou later when I picked up his role,” stated Bryce. When asked what his favorite scene is, Bryce recalled, “Be Our Guest is my favorite scene. It is really fun to sing and it’s not too long.” Mr. Duncan credits his fourth grade teacher for sparking his interest in acting after she had the class act out the Wizard of Oz. It is important to note that the character of LeFou is an adult. Bryce the actor, is 12 years old. “Try your hardest, do your best, but most importantly have fun. Make everything your own,” stated Duncan when asked what the best advice he received about stepping into a role in which the character is much older than he is, personally. Bryce is a 6th grader at Macon County R-lV in New Cambria and hopes to be an actor when he grows up.

The Macon Carousel Production of Beauty and the Beast was originally scheduled to debut to the public on March 19th followed by six more showings with March 28th being the last one. However, due to the Global Pandemic of Coronavirus, the production has been postponed until August with the first showing being August 27th; marking the first play by Carousel Production to be postponed in all of its history. The updated scheduled dates are August 27th, 28th, 29th, 30th, and September 3rd, 4th, and 5th.

If you are holding physical tickets for the canceled March dates of Beauty and the Beast, they may be exchanged for ANY of the rescheduled performances. If you know that you cannot attend the show on any of the rescheduled dates, please consider making your ticket a donation to Carousel, as all expenses to produce the show have already been paid.

Carousel Productions thanks you for your patronage and support.”