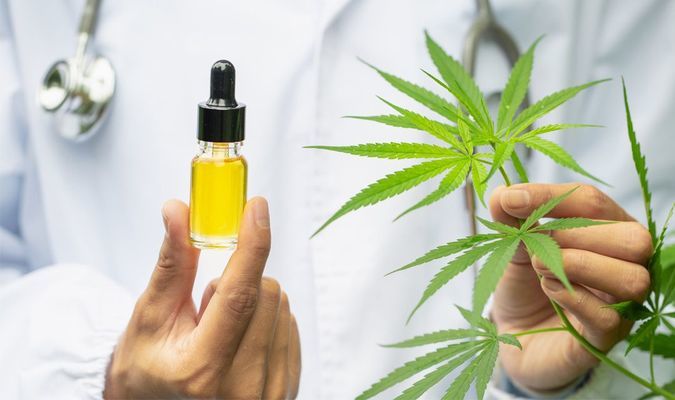 MACON, MO -- In November of 2018, Missouri voters, with an overwhelming majority (65% approval), approved of Constitutional Amendment 2 making the state at the time, the 31st state in the Union to adopt some form of medical marijuana program. From this moment forward, investors, pharmaceutical companies, and those interested in getting into the business of growing marijuana for medicinal purposes set their eyes on an industry waiting to begin in the Show-Me-State.

For his entire life, Richard Gunnels has worked on his family farm with his dad Stephen and uncle Greg Gunnels, some of which is a century farm that has been in his family for over 100 years. He graduated from Atlanta High School in 1987 and would stay on the family farm to help cultivate and continue the family tradition of row cropping; 3300 acres of corn and soybeans to be exact. To this day, Gunnels still lives on the family farm in Elmer, along with his wife Jody and his two sons Korbin and Gabe.

When the constitutional amendment in November passed, Mr. Gunnels became increasingly interested in what the industry could bring to the local community. “When it passed in November, I just started to think about it. I felt like this could be something fulfilling in the aspect of my family and my community. I also was intrigued in regards to the regulated industry it would be, protecting our investment as well as the medicinal side of it; our work and crop going toward helping others,” stated Gunnels. After talking it over with family members and especially his wife, Gunnels started to reach out to consultants in Denver that could help him through the license application. Most importantly, he began reaching out to members of the Macon Community in establishing a path forward. “It really had a snowball effect. Each day we were taking more steps to our goal and before you knew it, we had 30% of our application completed then 50% of it completed, and then there we were the night before the state released the list of accepted applications. I couldn’t sleep the night before,” recalled Gunnels. When asked about the initial start of the journey and establishing connections, Gunnels stated that Youtube videos, reading articles, and simply creating a LinkedIn account quickly put him into contact with some of the most prominent and experienced individuals and groups in the industry of medical marijuana. “Creating friendships and connections all around our state and country was probably one of the most rewarding parts of this entire process. Everyone for the most part was wanting the best for us and would offer their help when we asked for it. It was a team effort,” stated Gunnels.

The application itself was a lengthy one. Besides the length of the entire process, for each application submitted for a cultivation facility, applicants had to pay a $10,000 non-refundable fee (even if they were later denied after review by the Missouri Department of Health and Senior Services). For a Dispensary Facility, applicants had to pay a $6,000 non-refundable fee, Laboratory Testing Facility applicants had to pay a $5,000 non-refundable fee, Manufacturing Facility applicants had to pay a $6,000 non-refundable fee, and a Transporter applicant had to pay a $5,000 non-refundable fee. The application process lasted throughout the summer of 2019 and was strictly online through the Missouri DHSS. Applicants for the Cultivation Facility such as Mr. Gunnels had to submit extensive and thorough business plans for their facility and company, plans for site security, how the facility would impact the surrounding community in a positive way, and provide any experience with agriculture, horticulture, and healthcare. Applicants also had to submit obvious personal information that often comes with an application process including information about the character and veracity of the applicant, relative experience of principal ownership and management, ownership and management plans for the company, blueprints of the proposed facilities, copy of local zoning requirements with plans on how the facility(s) will be in compliance with those requirements, a certificate of good standing with the Missouri Secretary of State, etc. “It was one of the biggest applications I have ever submitted in my life, but this has been probably one of the greatest experiences as well. I can’t express how fortunate we were to have the people like we did that were helping us. I personally can’t thank my wife enough. She helped out so much,” stated Gunnels.

Once the applications closed in early fall, the State of Missouri through a blind scoring process, began to score the applications which would lead to the 60 approved cultivation applications that were released December 26th, 2019. Upon notification of approval, companies have 5 days to accept that approval through the State of Missouri. The state had a blind scorer who specifically scored the applications without having access to identifying information of the applicants. “Throughout this entire process, it has been important to us to be fair and transparent as we implement all pieces of this program,” said Lyndall Fraker, director of the DHSS Section for Medical Marijuana Regulation. The process that Missouri has created, from the application to the scoring, has received national attention as one of the foremost and premier systems established by a state. According to the Missouri DHSS, over 500 companies sought a cultivation license with some companies submitted up to three applications (which was the max).

Agri-Genesis LLC which was created by Richard Gunnels, submitted three cultivation applications in which all three were approved. It is important to note that each application represents the license for the company to have 30,000 square feet of flowering canopy in their facility. Mr. Gunnels has been approved to have the max amount set by the State, which is 90,000 square feet of flowering canopy. Richard Gunnels’ Agri-Genesis LLC had the 3rd, 5th, and 15th highest scored applications in the entire state of Missouri. “Like I said, we couldn’t have done it without the community and family support that we had. I believe our applications scored as high as they did because of how they were oriented around the local impact that this business will bring to our community. I made this about Macon. It was unique. I feel a great deal of responsibility to give back to this community now. It’s a privilege and honor to have not just one, but three licenses. It’s not something to be negligent with or misused,” stated Gunnels.

Moving forward, Gunnels talked about the plan moving forward. The facility will be built in the Industrial Park of the City of Macon at 424 Lake Street. Gunnels hopes that the facility will be up and running by the fall of 2020. When asked about choosing Macon for his business, Gunnels stated, “Looking for a building site, I took into account the environmental impact, security from the local law enforcement for the employees and the community, and the jobs it would create. Macon is an ideal place for any new business to locate. Everyone I worked with was phenomenal.” Furthermore, Gunnels expressed that the facility will have a high level of security (which is required) both in and around the facility and when transporting the product. Only approved personnel will be able to access the facility, handle the product, and transport them when needed. The State of Missouri required applicants to provide a plan for site security in the application.

Gunnels is awaiting the approval of a manufacturing license which is set to be announced toward the beginning of January 2020. With a cultivation license, the company can grow and harvest the crop. Additionally, with a manufacturing license it will allow Agri-Genesis LLC. to manufacture the crop into medicinal products (medicine, gummies, etc.) making sure the appropriate and legal dosages are manufactured into the product. In regards to employment, Gunnels has stated that all of this will bring dozens of new jobs to the community; anywhere from 50-60.

According to the State Auditor’s Office via the ballot language of the 2018 approved constitutional amendment, the sale of medical marijuana will be taxed by a rate of 4% and the funds will go to healthcare and services for Missouri’s Veterans. In total, it is stated to generate additional funds of approximately 18 million dollars for the state and 6 million dollars for local governments. Agri-Genesis LLC. is the only company approved from Macon and of the 60 approved cultivation applications, is the Northernmost company in Missouri. Additionally, it is among a handful of rural-approved-facilities in the state. Most approved facilities were in the Kansas City and St. Louis region.

The vast majority of applications submitted throughout the state were denied. In our subscription area (Macon and Shelby County) there were two companies that were denied licenses. Those that were denied were EFOS LLC. and Misfits Farm LLP. The proposed cultivation facility submitted to the state under EFOS LLC. was listed at 211 Old Highway 36 in Clarence, Missouri. Both applications by EFOS LLC. were denied by the State of Missouri. The cultivation facility application submitted by Misfits Farm LLP. was listed at 29595 Highway 3 in La Plata, Missouri. Their only submitted application was denied by the State of Missouri. To access the online Missouri Business Entity database to lookup business information of an LLC or LLP (owner information, address, date of establishment, etc.) visit: https://bsd.sos.mo.gov/businessentity/besearch.aspx?searchtype=0

Meanwhile, for Richard Gunnels, his family, company, and family farm, a new chapter is beginning.

The Department of Health and Senior Services has reported that over 25,000 people have been approved both by physicians and the state of Missouri to receive medicinal marijuanna in the state of Missouri. Under the Missouri Constitution, qualifying medical conditions to possess cannabis are: “Cancer, Epilepsy, and Glaucoma. Intractable migraines unresponsive to other treatment. A chronic medical condition that causes severe, persistent pain or persistent muscle spasms, including but not limited to those associated with multiple sclerosis, seizures, Parkinson’s disease, and Tourette’s syndrome. Debilitating psychiatric disorders, including, but not limited to, post-traumatic stress order, if diagnosed by a state-licensed psychiatrist. HIV or AIDS. A chronic medical condition that is normally treated with prescription medications that could lead to physical or psychological dependence, when a physician determines that medical use of marijuana could be effective in treating that condition and would serve as a safer alternative to the prescription medication. A terminal illness. In the professional judgment of a physician, any other chronic, debilitating or other medical condition, including, but not limited to, hepatitis C, amyotrophic lateral sclerosis, inflammatory bowel disease, Crohn’s disease, Huntington’s disease, autism, neuropathies, sickle cell anemia, agitation of Alzheimer’s disease, cachexia, and wasting syndrome”

Dispensary and Manufacture Licenses are set to be announced in January 2020.