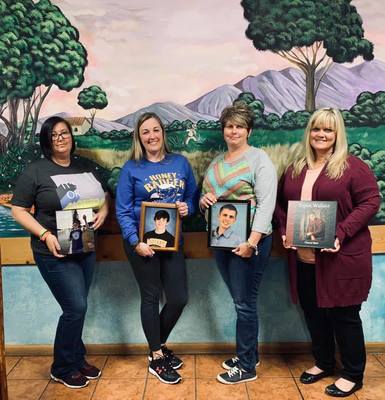 Macon, MO -- A group of northeast Missouri mothers, all of which have lost their son to suicide, will be speaking to parents, students, and to the greater part of the Macon community later tonight on the campus of the Macon R-1 School District. Angie Wallace, Nycole Griffin, Tosha Lorton, and Wendy Morris, also known as “MOMS Breaking the Silence” will be telling their story while speaking directly toward the topics of mental illness education and financial assistance for our communities. ”Prior to Taylor’s suicide we never really gave a lot of thought to mental health. I mean, we knew it was important but until Taylor started struggling, I really didn’t give it a second thought. I will do my part to help end the stigma surrounding mental illness. I don’t want this to happen to another family,” stated Angie Wallace, who lost her son Taylor Wallace, on October 27th, 2016. Nycole Griffin, mother of Logan, stated, “I am a mother of an only son that is no longer with us because he died by suicide. I am a mother who everyday wishes I could see him one more time. I am a mother who before April 9th 2018 thought she had the perfect relationship with her son. I am here because I lost my son to suicide and I didn’t even realize there was a problem. Sure I saw a few things that might have made me think twice but anything I ever talked to friends, family or coworkers about we all just dismissed as typical teenage behavior. I am here to try to prevent this from happening to someone else.”

Mental Health America is the foremost non-profit organization in the United States that is promoting and helping provide awareness regarding the mental health of Americans. According to a study released by Mental Health America, Missouri ranks 26 out of 50 with access to mental health care. While our neighbor, Iowa, ranks in the top 5 states in the nation with access to mental healthcare. The organization makes this conclusion by, “The Access Ranking indicates how much access to mental health care exists within a state. The access measures include access to insurance, access to treatment, quality and cost of insurance, access to special education, and workforce availability. A high Access Ranking indicates that a state provides relatively more access to insurance and mental health treatment.” According to the National Network of Depression Centers, suicide is the second most leading cause of death for those between the ages of 15-44. There were roughly 42,000 deaths by suicide in 2014 in the US. One person loses their battle with mental illness every 12 minutes. Each year, 25,000 people become suicide survivors in the United States.

Ms. Lorton stated that one of the biggest goals they have is not only awareness but to advocate for increased funding for mental health care, while helping it become a priority on the minds of our elected leaders on the local, state and federal level. Furthermore, Tosha stated, “I also feel like people being able to get their medications in order to stay medication compliant seems to be a huge problem once an individual does receive help and sadly this is mainly in part due to pharmaceutical companies having the control that they have. I just feel like there is not nearly enough resources for people to access, especially in rural areas in contrast to the number of people that are diagnosed yearly with a mental health issue.”

Goals of the group are:

6. Education of Mental Health which Include Sharing our Stories Through Public Speaking Opportunities

Open a Mental Wellness Outpatient and Residential Facility in Brookfield, MO which will provide:

All services and activities will be led by trained instructors.

Tosha Lorton is credited for bringing the mothers together, back in 2018 to form the group now known as “MOMS Breaking the Silence” which is operating under the 501-C3 of Taylor Wallace’s Suicide Prevention Foundation that was created by his mom, Angie. These are their stories.

“Taylor was an incredible passionate young man who loved deeply and delighted in academics. He was the valedictorian of his graduating class and attended Columbia University in NYC. Taylor achieved many great things and his life was an example for those who loved him. Taylor’s depression slowly began to evolve after the loss of one of his educators. His junior year we began noticing behavioral changes; not sleeping, sleeping too much, anger outbursts, poor eating habits, and symptoms of Trichotillomania - the compulsive desire to pull out one’s hair. We began counseling that spring in KC. Before he left for college he was prescribed an antidepressant, but on October 1, 2016 he left NYC and returned home. On October 27, 2016, Taylor took his own life. “ - Angie Smith Wallace

Logan had a small close group of friends but was also really friends with everyone. He loved to play video games, listen to music, watch Youtube videos and participate in cosplay. He enjoyed spending time with family and friends and would even go to Walmart with me whenever I would go. We did not realize at the time that Logan may have been battling with mental illness; he did suffer from falling grades, loss of interest in hobbies and what I now believed to be depression and bipolar disorder. Logan died by suicide on April 9th 2018.” - Nycole Griffin

“Zayne was extremely active in school and had many friends. He was one of those people whom others were just drawn to. He loved music, his family and friends, art, video games, and sports, and man, was the kid funny! He could make you laugh until you couldn’t breathe and there were tears in your eyes. He didn’t have to try hard, things just came natural to him whether it be school or athletics. Around age 13 Zayne began exhibiting signs of anger and symptoms of depression and high anxiety. We began counseling and case management services; however Zayne lost his battle with mental illness taking his own life on May 11, 2018 at age 16.”- Tosha Lorton

“Ty was a person who loved everyone. He wanted everyone happy and always made you smile when he walked into a room. Ty began self-medicating at age 16 which led to an addiction and Ty’s life took a less than desirable path. He was placed in a program called Teen Challenge. He had 3 years clean when his path once again took an ugly turn. He was placed on probation and sentenced to Drug Court. As his parents, we did not make the correlation between self-medicating and depression. At age 23 Ty was diagnosed with Bipolar Disorder. He had 6 months clean and sober when he took his own life on November 8, 2018.” - Wendy Drummond Morris

This past October, the group held a dinner and an auction, raising a total of $23,000. Tonight’s public event will be held at the Macon R-1 High School Cafeteria, starting at 6 p.m.

“Suicide is not a selfish act, it is losing the battle to the disease.” - Tosha Lorton

During the interview, all four mothers told their story and the story of their son. We want our readers to get the chance to read them. Provided in the links below, is their writing(s) that at times can become graphic in nature regarding stories of suicide.

From the reader's left, Nycole, Tosha, Wendy, and Angie are pictured holding pictures of their sons, Logan, Zayne, Ty, and Taylor.