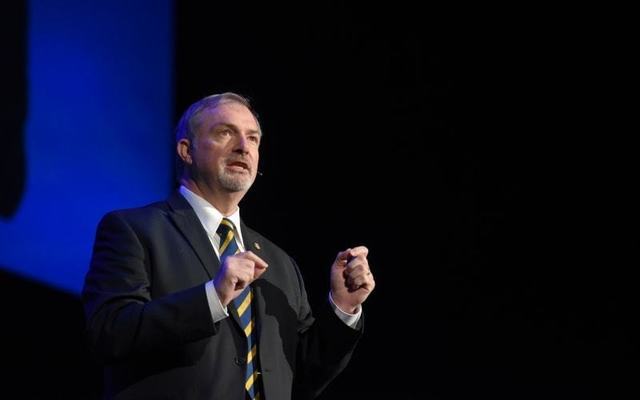 WASHINGTON DC -- Dr. Steve A. Brown who has since 2011, served as the National FFA Advisor and Board Chair of the National FFA Organization, retired at the conclusion of the 92nd National FFA Convention last week. Throughout his time at the helm of one of the largest youth organizations in the nation, Dr. Brown oversaw membership reach well over 700,000 members from every state in the nation, Puerto Rico, and the Virgin Islands. He also visited the 40th National Convention of the Future Farmers of South Korea - strengthening ties with international partners within the Agriculture Industry.

Collectively, Dr. Brown has had over 50 years of involvement in the National FFA Organization. He grew up in Orrick, MO with a graduating class of 36 students; Brown wore the blue corduroy jacket as a member of the local FFA Chapter in high school. He would later pursue a higher education at the University of Missouri where he would eventually receive a doctorate in Agriculture Education as well as a master's and undergraduate degree. Brown began his career at the Macon Area Career and Technical Education Center (MACTEC - Macon R-1 Public School System), teaching agriculture studies. For nearly 23 years, he served as an agricultural education district supervisor and state FFA executive secretary at the Missouri Department of Elementary and Secondary Education. After the retirement of Dr. Larry Case, Dr. Brown was appointed to the national post in 2011.

Not only did Dr. Brown serve as the National Advisor and the Board Chair of the organization, but he also was an Educational Program Specialist at the US Department of Education in Washington DC, with a background in Agriculture, Food & Natural Resources Sciences. Several years ago he was named as one of the most influential agricultural leaders in the United States.

With over 69,000 attendees and 400+ exhibiting companies at the 92nd National FFA Convention and Expo in Indianapolis, Indiana, Brown shared some final words with convention goers, "Change will continue. Be willing to embrace change. Continue to discover your purpose in life, never underestimate your potential, pursue your passions and be persistent."

According the organization's website, for years Dr. Brown had a quote by Robert H. Schuller hung above his desk that said, "Leadership is thinking ahead, planning for the future, exhausting all possibilities, envisioning problems and dreaming up solutions to them. Leadership draws its inspiration from future projects, not past accomplishments."

Reference -- picture and career information of Dr. Steven Brown was found on the National FFA Website

5 Surprising Ways The Pandemic Could Change Yo...