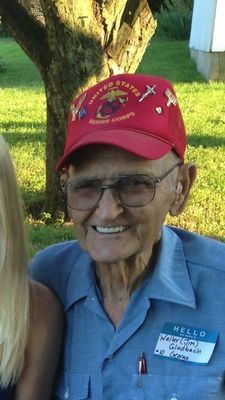 Walter Gladbach, or Jim as he is affectionately known by family and friends, was born March 27, 1923, in rural Chariton County. He was the 11th of 15 children and one of only three children to graduate from high school.

In January 1944, Walter enlisted in the U.S. Marines, where he was trained as a radioman. He served at Saipan and Okinawa and was among the occupation forces in Japan after the bombing of Nagasaki and Hiroshima. In December 1947, Walter began working in Chicago, Il., for Atchison, Topeka, and Santa Fe Railroad, now known as Burlington Northern & Santa Fe. In the signal department, he worked first as a laborer, then as a gang foreman, and finally as a signalmaintainer. Much of the knowledge Walter gained in the military working with electricity and radios enabled him to have a successful career on the railroad. He retired in 1983, after 36 years.

In the fall of 1957, while working for AT&SF, Walter took the signal maintainer job in La Plata and along with his late wife, Wanda, and four young children moved to town.Walter still lives in the same home he purchased 62 years ago. Walter and his family found La Plata to be a warm, welcoming town; and while he had opportunity to transfer closer to his hometown of Mendon, Mo., he chose to stay in La Plata, feeling it was the right place to raise his family. During his time here, God blessed him with 3 more children, 16 grandchildren, and 11 great grandchildren. His first great great grandchild ison the way.

While keeping busy as father and grandfather, Walter also supported and looked out for his community. Over the course of four decades, he served as councilman, EMT, housing board secretary, American Legion commander, and on other civic organizations providing countless hours of service. Walter helped bring about significant improvements contributing to the success of his community, neighbors, friends, and family. He played an integral role in negotiating efficient and reliable electrical power for the city; assessing and building the new reservoir ensuring an ample water supply for generations to come; installing lights at the old ballfield, and development of affordable housing.

Through his years of selfless community service, Walter has embodied the ideals of hard work and success synonymous with the town of La Plata.

(It is with our most sincere regret that this announcement was in the Journal as an Obituary. We are horrified that this could happen. Please accept our apology!)