City of Macon street, pothole, and sidewalk repairs to begin - Thanks to the Transportation Sales Tax 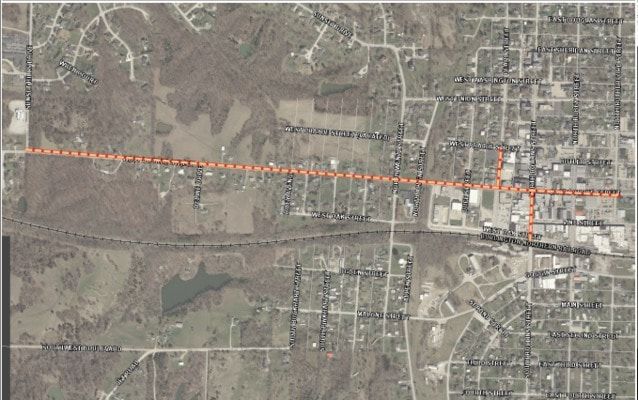 The total project will include approximately one and a quarter mile of city roadway and will have an all-in cost of roughly one million dollars. The funds accrued from the Transportation Sales Tax will be used to fund this project and upon competition, savings will once again begin, for future street projects. Funds from the Transportation sales tax have also in the past been used to purchase new capital assets such as a snow-plow truck, skid steer and tractor, and the Downtown Vine and Rubey Overlay. The City of Macon will also begin pothole repair around the City with a newly purchased mechanical pothole patching machine – providing repairs that will last longer than a North-Missouri winter.

When asked about why Bourke Street was chosen for this extensive project, City Administrator Avis Marshall stated that the City Council following the passage of the Transportation Sales Tax in 2016, established a list of infrastructure needs around the City of Macon. “Bourke Street was chosen from that list for multiple reasons: Needed widening for safety reasons, major traffic collector for citizens to get to highway 63, serves food pantry, nursing home, post office, and funeral home, it is a school bus route, completes downtown resurfacing project that began with TAP Grant funds, and is visibility for tourists coming to Macon Downtown for shopping and Maples Repertory Theatre,” stated Marshall (via email).

On top of the street projects being completed, 24 sidewalk corners are being replaced by the City of Macon to make them ADA compliant. This specific project will also render sidewalk replacements of the deteriorated sections on the 100 block of East Bourke Street and the 100 block of North Rollins Street.

On June 11th, 2019, the Macon City Council awarded Capital Paving from Jefferson City, Missouri the winning bid for the final phase of the Bourke Street Project.

“It’s been roughly three years since the Transportation Sales Tax has been passed. We are now getting to address a big project within our town after building up our savings with that tax revenue. We are thankful for our citizens in supporting our community and approving the Transportation Sales Tax back in 2016 so that we can put those funds to good use and to improve our town as a whole,” stated Talt Holman, Mayor of Macon, Missouri