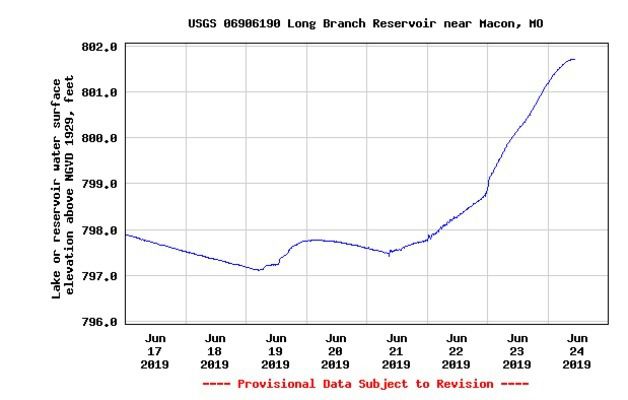 MACON, MO – Water at Long Branch Lake near Macon, Missouri has risen four feet from recent downpours that occurred over the June 21-23 weekend in the North-central Missouri area. Toward the end of May, Long Branch experienced a high inflow of water, eventually reaching its all-time elevation record of 806 msl (mean sea level). For the next few weeks after the weather seemed to be cooperative, water levels quickly began to recede with the elevation lowering to roughly 797 msl on June 19th, 2019. After June 19th, the lake’s elevation began to rise after the reservoir experienced a substantial inflow increase once again. As of today, Long Branch has a current elevation of 801.64 msl which is 10 feet over the normal operation level (791 msl). On the daily Northwestern Division, Kansas City District Lower Missouri River Basin Reservoir Bulletin, Long Branch had the second highest daily elevation change compared to the 30 other reported Army Corps of Engineer operated dams and reservoirs listed on the bulletin. Long Branch had a inflow of 45 cubic feet per second on Tuesday June 18th, 2019. But by Sunday June 23rd, 2019, the inflow into the reservoir had increased to 3,600 cubic feet per second.