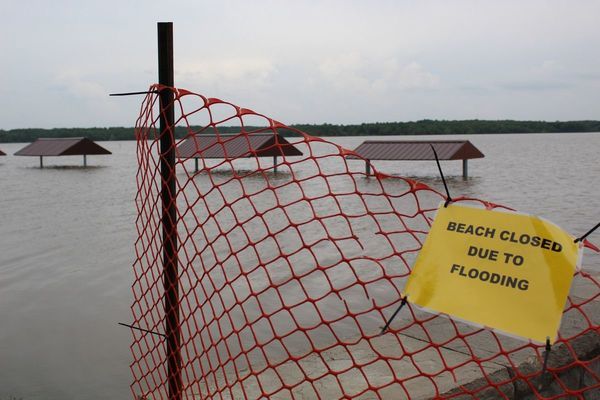 (MACON, MO) On Thursday, May 30th, 2019, the Long Branch Reservoir hit "a new personal record." Currently the lake is sitting at 805.98 msl (mean sea level) which is fifteen feet above normal operating elevation which is 791.0 msl. In 2008, the water level rose to 803.64 msl which for the last decade, has been the highest on record, until this year. On May 29th, 2019 Long Branch experienced it's highest inflow of water within the last eight days with a recorded 6,150 cubic feet per second coming into the lake; today, the inflow decreased to 5,710 cubic feet per second. 24 hours ago, Long Branch Lake had a daily elevation change of 2.69 feet (increase) which was the highest reported on the Army Corps of Engineers Daily Bulletin Report for the Northwestern Division for the Kansas City District. Right below Long Branch Lake, Rathbun Lake which is located just north of Centerville, Iowa, rose roughly 2.17 feet per day. Other lakes within the division/district are the Harry S. Truman Lake, Lake of the Ozarks, and others.

Long Branch is designed to hold water up to an elevation of 809.0 msl (currently sitting at 805.98 msl). "Once the water exceeds the 809.0 msl elevation, then spillway flow occurs. This is flow that follows a design constructed in the landscape that leads the flow of water around the main dam," stated Phillip Brown, Operation Project Manager of Long Branch. The amount of water leaving Long Branch at the spillway, is self-regulating. As water comes into the reservoir, constraint at the inlet (which is uncontrolled) within the tower, releases a certain amount of water, accordingly. "There are no traditional water control gates in the outlet tower on Long Branch Dam," stated Brown. Even with the outflow uncontrolled at the outlet tower into the spillway, Brown stated that there will be staff working around the clock until conditions improve. Within the last 24 hours, the outflow at the spillway from Long Branch Lake increased from 918 cubic feet per second, to 1,125 cubic feet per second. Water from Long Branch continues south through the East Fork Little Chariton River. When asked about what the increase of outflow from Long Branch means for those down stream, Brown stated, "Fortunately there are no residential or commercial properties directly below the dam. Further downstream agricultural lands are effected, in part by flow from Long Branch, but more so based upon the backwater effect contributed to by the Missouri River conditions. With respect to areas effected by Long Branch Lake, we have active communication on-going daily with stakeholders and managing officials. Efforts to prepare areas for increased lake levels and downstream flows are facilitated by communication on lake and river forecasts. When needed, the Corps does provide support to flood fighting efforts via County Emergency Managers requests/coordination."

In conclusion, Brown stated that as of right now, there is no damage to the Long Branch Lake Dam and that it is functioning exactly how it was designed to; "Absolutely safe, the dam is functioning as designed. The standing water is superficial, just ponding that can't runoff due to saturated conditions. As I said, we are monitoring all the instrumentation on the dam and it is functioning as designed, no concerns." Beyond the dam, Brown did say that the increase of water into Long Branch Lake due to recent heavy rains, resulting in high shore conditions, will cause erosion and debris concerns, but the full analysis of what the last eight days have caused cannot be conducted until the water levels drop, significantly.

With the lake currently cresting, if there is no additional rain/inflow with regards to Long Branch Lake, the water level will begin to drop. Long Branch Beach is still closed including all boat ramps around the reservoir. Campgrounds are still open and pedestrians can continue to walk around the lake - the spillway is currently closed. Visitor Center Road along the dam and to the beach, was anticipated to be closed Thursday morning, but due to projections being lower, the road remained open.

Long Branch Dam was authorized by Congress in 1965, construction began in 1973, and the dam was placed into operation in 1980.