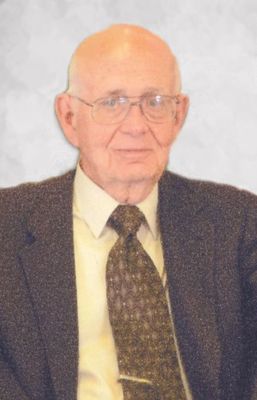 Tom was born 11 December 1926 in Winfield, Kansas, to Asby Brake and Effie Clara (Hittle)Clark. The day after his high school graduation in May 1944 he enlisted in the U.S. Navy. He went to boot camp at Great Lakes Naval Training Station and was sent by troop train to San Diego before deploying to Pearl Harbor. After serving in the Pacific, he was discharged 18 October 1947 and returned home to Winfield, Kansas.

He graduated from Southwestern College in Winfield, Kansas and married Vera Ellen Mead on 19 December 1948, eventually settling in Moberly.

He and his wife Vera owned and operated Clark’s Shoe Store in downtown Moberly for almost 40 years before retiring in July 1994. While Tom worked at the shoe store, Vera raised their five daughters and after the youngest started school, she began working full-time in the store with Tom. Clark’s Shoe Store was truly a family shoe store providing shoes for every member of their customers’ families and every member of the Clark family worked in the store. Their girls often helped with radio advertising, Moberly’s Sidewalk Bazaar, Moonlight Madness, and other specialty events. Vera preceded Tom in death in 2005.

Tom was an active member of Trinity United Methodist Church since 1955 where he did varied outreach for the church, taught Sunday School, served as Sunday School Superintendent, was a member of United Methodist Men, and served on the Board of Trustees. He was also an active member of the Moberly Jaycees, Kiwanis Club serving as President in 1961, and the Moberly Area Chamber of Commerce.

In addition to his first wife Vera, he was preceded in death by his parents, sister - Nancy Kathleen, grandsons - Alex B. Clark and Cameron Lewis, and son-in-law Kelly Lewis.

Memorial contributions may be made to Trinity United Methodist Church, Moberly, Missouri.

Words of comfort and support may be shared with the family at the visitation which will be Monday, May 13, 9:30-10:30 am at the Trinity United Methodist Church. Services honoring and celebrating Tom’s life will follow at 10:30 am. Committal services, military honors and inurnment will be at the Missouri Veterans Cemetery.