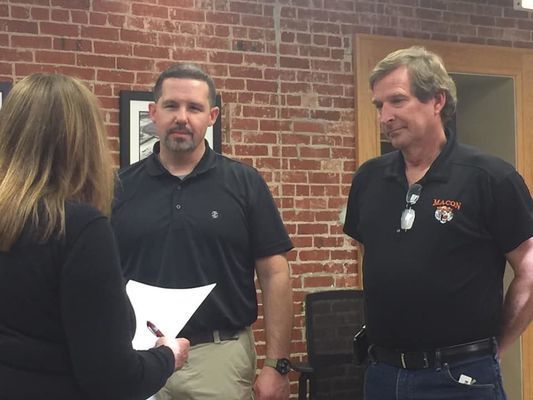 (MACON, MO) On April 11th, 2019, the Macon R-1 School Board of Education held a special session to reorganize the board and elect/install new officers within the board. The reorganization comes after the April 2nd, 2019 General Municipal Election in which Chris Nelson and Joe Claypoole were (re)elected to the board - Chris Nelson clinching his first term on the board. The officers of the Macon R-1 School Board are President and MSBA Delegate (Donny Wyatt), Vice President and MSBA Delegate (Bill Noyes), Secretary (Becky Baldwin) and Treasurer (Sandra Boling).

We reached out to the three candidates that were in the Macon R-1 School Board Race on April 2nd for a statement after the election. Chris Nelson had 896 votes, Joe Claypoole 742 votes, and Jerry Martie 733 votes - the two with the most votes won.

JERRY MARTIE: “I just want to say “Thank You” to everyone that supported me in this election as well as in past elections. Also, I thank all that took the time to exercise their right to vote as this is what make our country so great. It has been an honor to have served the patrons of Macon R-1 for the past six years. Some say it’s a thankless job, but to me, you receive your own personal thanks every day, knowing that what you do affects so many lives. I congratulate Chris and Joe on their wins and wish them and the rest of the board the best. Macon is a great school and offers many opportunities for our students. I am confident this will continue.”

CHRIS NELSON: “I wish to thank all who came out to vote on April 02nd. It is easy to forget just how important every vote is during an election and just as easy to see how an individual can be overlooked in a group. My hope is that as a representative of the Macon R-1 School Board, I do neither. Thank you to all who have reached out in support during this election period. I am honored to have the opportunity to serve the Macon R-1 school district and will attempt to do so with dedication, professionalism and discernment. While I transition to the role of a board member, the one currently held by Jerry Martie, I will not be able to take his place. Considering his lifelong relationship with education, Jerry continually provided a unique perspective to the Board during his tenure. The perspective I hope to bring to the Board will be unique, as well, shaped by the events and experiences of my life. Seeking council from a trusted source is a necessity in life and in matters of education, Jerry Martie is at the top of my trusted sources list. Again I say, thank you.”

**Joe Claypoole did not provide a statement**