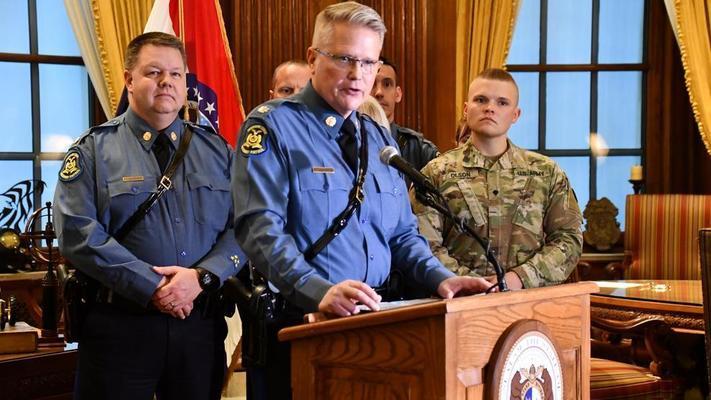 During a press conference in Jefferson City, Governor Parson touted the state patrol as one of the best agencies within the United States and stated that Lt. Colonel Olson has the record to lead the patrol. Lieutenant Colonel Olson grew up in Chillicothe, MO. He graduated from Chillicothe High School in 1986. Olson earned a Bachelor of Arts in psychology from William Jewell College in Liberty, MO, in 1990. He completed the FBI National Academy in Quantico, VA, in June 2011. Lieutenant Colonel Olson and his wife, Ronda, have two sons, Lance and Garett. Further career highlights of Olson are highlighted on the Command Staff page of the patrol's website. In 2004, Eric Olson was promoted to Lieutenant and was assigned to Troop B Headquarters in Macon, Missouri. He remained at that post until 2014 were he was promoted to Captain and became the commanding officer of Troop A in Lee's Summit. Olson has also served as commander of the Criminal Investigation Bureau, General Headquarters, Jefferson City, MO. In that capacity, Olson had direct oversight responsibility for the Crime Laboratory Division, Division of Drug & Crime Control, Gaming Division, and Missouri Information Analysis Center.

"This is certainly a humbling experience for me — and I will do my best to represent the Patrol in a manner that's consistent with those who have gone before me," stated Olson.

"When I came on, we did everything with a pencil and a pen, and went back to an office and wrote reports, then relayed those over to a headquarters, in a car," he recalled. "Now, all the patrol cars are all equipped with mobile data terminals, video cameras and highly technical equipment. There are many challenges for law enforcement, in general. I like to focus on the factors out there that I actually control. While it is important to understand history, looking to the future to identify the potential law enforcement needs for the citizens of Missouri, and how the Patrol can best contribute to public safety, is a high priority for me," stated Olson in the Press Conference.

"Lt. Col. Eric Olson (is) the ideal fit to be the 24th superintendent of the Missouri State Highway Patrol," stated the Governor of Missouri, Mike Parson

Karsten, the 23rd superintendent of the patrol also backs the decision to pick Olson as her successor.