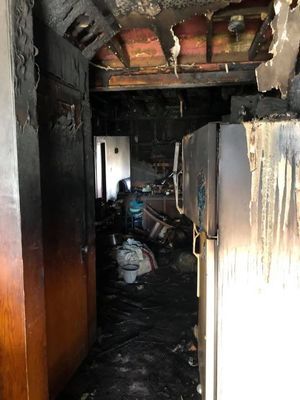 MACON, MO — A fire on Christmas Eve has left a local family with questions and without words, while a community rallies support after the family’s house and belongings were destroyed by a blaze that began shortly before 9:30 that night. “We lost everything. Our clothes. Our furniture,” stated Kayla Russell daughter of Shannon Benson and granddaughter of Norma Benson (both of them being in the house at the time of the fire).

According to the Macon Fire Department, the department was dispatched to the 300 block of East Union in Macon around 9:30 that night on reports of a structure fire. Thankfully, no person was seriously injured. Ms. Russell stated, “My mom and grandmother were home while my two sisters and I were at my other grandma’s house. Smoke appeared and my mom heard the fire alarm. She then got up and called for my grandma to come down. They both got out okay but they inhaled a lot of smoke.”

Russell stated in a Facebook post, “The community has already come together to help us through this. Everyone got out safely which is all that matters. We appreciate all the prayers, please keep sending them our way!!” To view donation information, Kayla Russell has posted public information on her Facebook page.

The Macon Fire Department is still investigating the cause of the fire but has already ruled that “nothing suspicious in nature” has been found in regards to what contributed to it.

“On Tuesday 12/24/2019 at 21:30 the Macon Fire Department was dispatched to the 300 block of East Union for the report of a structure fire. Macon Fire Department responded with 2 fire apparatus, and 13 personnel. First arriving units encountered heavy fire from 2 first floor windows in the rear of the 2 story house. The fire was brought under control in less than 2 hours, containing the fire to the areas involved upon our arrival. Upon primary extinguishment, extensive overhaul operations were conducted to ensure hidden fires in the walls and attic were extinguished. All Macon Fire Department units and personnel cleared the scene at 02:53.

Upon investigation, there was nothing suspicious in nature found to be a contributing factor to the fire.”